Gus Grillasca: “To understand NFTs, you need to get involved with the community”

At NFT Expoverse, we spoke with Gus Grillasca, engineer, professor, developer, and pioneer in the promotion of Bitcoin and blockchain technology in Mexico, and Co-founder and director of the ArtOlin project, a software for the generation of time stamps on the blockchain in the form of unique and transferable tokens. We went to the roots of the crypto industry, the cypherpunk movement, and discussed topics like how to start in the world of NFTs creation. 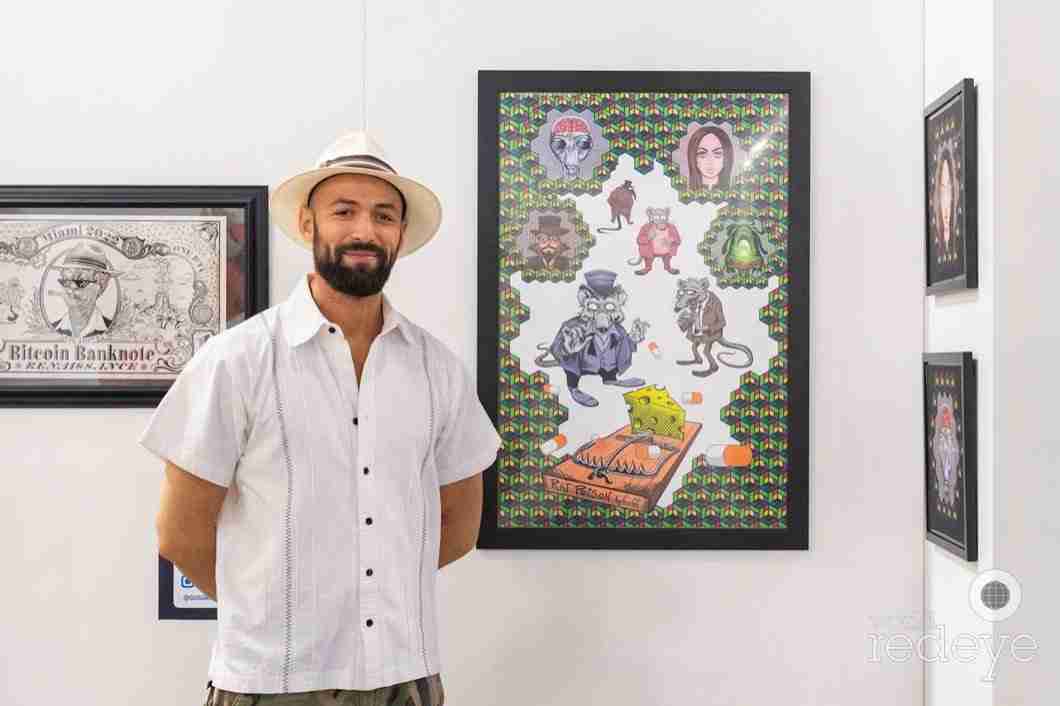 Is it worth it to invest and believe in NFTs?

Gus Grillasca: Those are two different questions. Believe, in the sense that this is something that is not going away. We should be aware of that. NFTs, in the broad sense, are digital collectibles. If we see the history of collectibles and the history of the technologies trying to build digital collectibles, it’s clear that this is beyond belief. This is something that is happening, whether we like it or not. So that’s that.

And as an investment, I strongly recommend people not to invest in something they don’t fully understand. Like everything else, like any financial market, like any object of speculation, you should not invest in something that you don’t fully understand. So, for example, if I like antiquities or shoes or trading cards, I should never invest unless I’m fully aware of as many aspects of that market to compete with other investors. So NFTs should not be understood as an investment unless you are an expert.

How did you become involved with crypto art?

GG: I was part of the first crypto NFT marketplace. So what we call crypto art could refer to any artistic manifestation regarding the cryptocurrency ecosystem, blockchain technology, or Bitcoin. And there’s definitely been artists doing these for a long time now since 2012, 13, 14.

The first time that a digital collectible had its own market was in 2016 with a collection called the Rare Pepes Directory. I was very lucky to be part of that market from the very beginning. So, from the first moment, so many other people were involved in that exercise, and I realized that this was a very important phenomenon because creators could monetize their work directly, peer-to-peer without asking for permission. From there, we just kept developing and creating more and more. And the market has just been growing ever since.

What is the Cypherpunk movement?

GG: The Cypherpunk it’s a techno political movement that started in the eighties. The word cypherpunk comes from the nineties. A group of developers, mathematicians, and cryptographers began developing technologies to create secure channels of communication between people, to create digital cash that was not controlled by a central authority to undermine the power of the government to control communications and money. So these cryptographers and mathematicians started gathering in online forums in the late eighties and the nineties.

All of them had common crypto anarchy ideas. So, crypto anarchy is a political philosophy that tries to empower the individual by limiting the power of the government. So, the crypto-anarchist eventually became not also known as cypherpunk. And this is how it started.

Following that question, how is this related to NFTs and the crypto world in general.

GG: The benefits come from Bitcoin, and Bitcoin is a very cypherpunk technology. Bitcoin is a neutral, global, public, peer-to-peer protocol and doesn’t require permission from a third party. So those are crypto-anarchist ideas and values. Since we have Bitcoin, all of the other cryptocurrencies are possible. Thanks to Bitcoin and its proper use of decentralization, and censorship-resistant, antifragile properties, we can build consensus mechanisms that don’t require a central authority. Those are cypherpunk ideas.

The first NFT markets come from Bitcoin and align with these values. The counterparty platform where the first NFTs were created is still a popular platform in many of the most valuable industries. Also, it is aligned with these values, and the markets are very much anonymous, permissionless, and decentralized.

So, the first NFTs and some of the best NFTs come from cypherpunk ideas. But most of the ecosystem, like most people in the world, is not even aware of this. Most of the platforms are becoming more mainstream or aligned with more mainstream values, which is obvious because most people don’t know about or don’t understand these kinds of libertarian anarchist values. But definitely, the thesis started with those values, in my opinion, and so many other people too. I believe that the best NFT, and some of the best collectibles, in the long run, will be those built on platforms aligned with the cypherpunk values.

Could you give our readers some advice on launching their first NFTs?

GG: Yes. The first step is that you need to have a crypto wallet. Ideally, a Bitcoin one. I know that for convenience, more people are onboarding these ecosystems through platforms like Tezos or most of the market is on Ethereum. This is understandable because the Ethereum platforms are more user-friendly, even though they are more expensive. Therefore, it is easier to use a platform like OpenSea instead of trying to use a platform like the free wallet.io, where you can do some of your NFTs on Bitcoin and require a little bit more understanding of what you’re doing to operate this stuff. But the number one step is you need to stop being a no coiner. You need to be a Bitcoiner. You need to understand how to use a Bitcoin wallet.

From there, I would definitely recommend trying to use counterparty and make tokens from Bitcoin, but if it’s not possible, start with Tezos, which is super easy. You just download an extension of your browser on your computer. You fund it with some Tezos that you can buy in Binance or any exchange, and then just start collecting, creating, or developing.

Since more and more artists are turning to the crypto world, do you avoid saturation?

GG: Well, honestly, I think it’s unavoidable because anything that says demand, and in this case, we’re talking about a market that is very convenient for collectors. So, like anything else that has demand, it is going to attract people. All sorts of people will be attracted to this ecosystem because it works. Definitely, some bad actors will be attracted to this ecosystem and the only way to fight it is with education. You should learn how to use these tools, protect yourself from scammers, and get surrounded by people with the right values and communities you like and support.

What is your opinion about the main criticisms made to NFTs: their environmental impact and people saying that they don’t understand their value.

GG: Well, we need to understand that value is subjective. A lot of people see that value comes from work or from, merit or utility. This is true. Those things are valuable, but the value itself is a subjective phenomenon. Value is something subjective. In the case of NFTs, scarcity creates more value.

Bitcoin is valuable regardless of all its flaws and critiques because it creates opportunity and scarcity. However, not all of the NFT segments have the same value because it depends on things like utility, popularity, static value, and artistic value. The value itself is something that arises when there is demand.

That was one question, and the other one regarding the environmental critique…This is more complicated for people to understand because you need to know how the Bitcoin blockchain works. First of all, like the theory of energy consumption, consumption is just a fraction of what Bitcoin consumes.

So it’s a little bit ridiculous to criticize Ethereum when we have Bitcoin, the biggest computer network and most energy-consuming network ever created. And this is inevitable. So there’s nothing we can do about it. So it’s impossible to stop Bitcoin mining. But what people don’t seem to understand is that the energy consumption of the Bitcoin network is by design. It’s meant to be like that because it’s a protection shield against attacks.

Another thing that they need to understand is that it is impossible to say a lot without the right context. So, for instance, if I tell you that I’m overweight, and I tell you I weigh 100 Kilograms without context, you don’t know if that’s a lot. If I’m a professional basketball player, that’s not a lot. So it depends. The context is very important.

Bitcoin doesn’t consume even a fraction of the 1% of the energy consumption worldwide. So it’s a little bit ridiculous to criticize Bitcoin as an environmental problem. If we’re talking about a network that provides a global monetary system that is unstoppable, borderless, permissionless, and governments can’t ban, and it’s consuming just a little fraction of what the traditional financial systems consume, it’s ridiculous.

I think the critique of the environmental issue is not a problem, but it’s very effective propaganda against the industry.

Do you have any advice for newcomers?

GG: My advice for newcomers is to understand this and focus on the positive. If you insist on focusing on the negative, you might as well say the traditional systems are good for monetizing your work, but it’s really bad. The traditional system is terrible at empowering small or irregular artists compared to what’s happening with NFTs. And also, people tend to focus on big projects and the multi-million dollar aids and people, and those auctions that raise millions of dollars for horrible drawings. It’s absurd to focus on that small percentage of what’s happening instead of focusing on the vast majority of creators that are monetizing themselves, which otherwise would be impossible. So I think that if we really want to improve what’s happening with artists, what’s happening with society, and with platforms, we should focus on the positive things to try to improve them instead of just complaining about the system and the ecosystem.

Why do Some People Hate NFTs? Is it Warranted?

Why is OpenSea’s NFT Trading Volume Down 99%?

Blockchain Interoperability: What is it and Why Does it Matter?

Why are NFTs so Expensive?

have an idea, concept, or stronghold in the blockchain technology world? we’d love for you to come join us and share your plans for the future. an incredible chance to network, make new acquaintances and discuss opportunities face to face.

come share your valuable insight and knowledge to help further the development of web 3.0. speakers and educators can create invaluable content, host seminars, and converse with attendees in q&a sessions.

learn about the next major advancement in our society. get in from the ground-up. this revolutionary opportunity will help you get a jumpstart on the inevitable mass-scale adoption of blockchain technology and how it will affect our world.